The Raven, by Edgar Allen Poe 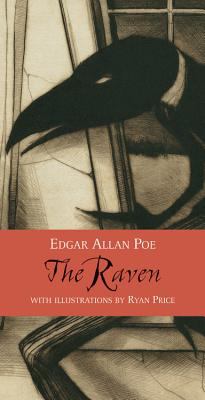 The Poem, “The Raven”, by Edgar Allen Poe, is about a wealthy man who loses his wife and becomes depressed.
The poem starts off by the narrator is reading a book at night until he hears a tapping at his chamber door. He believes that it’s only a visitor. The reader knows that it’s not just a visitor- and Poe builds up tension here. The man opens the door and no one is outside. A tapping occurs at the man’s window and a raven flies in and sits on the Bust of Pallas. The Bust of Pallas represents wisdom and knowledge, therefore, it can be concluded that Poe is trying to convey that the bird is knowledgeable. It can also be concluded that the man is rich because no ordinary person has a bust of a god at their door.
After the bird rests on the Bust of Pallas, the man asks for its name, to which the bird replies, “Nevermore”. This repetition occurs throughout the end of every stanza and seems to illustrate the man’s insanity over the loss of his wife, Lenore. It also adds on to the “Aw” tone of the poem. The bird represents the man’s sorrow and Poe conveys that the bird, A.K.A. his sorrow, won’t go away when it refuses the man,
The man tries to figure out why the bird won’t stop saying “Nevermore” and asks why the angels in Heaven sent it to him. Bird replies “Nevermore”, which builds up curiosity. Then, he asks if there is peace and happiness in Heaven (“Is there balm in Gilead?”). Bird replies “Nevermore”. By saying this, the man is driven crazy because he’s never seen anything otherworldly and supernatural like this. The man calls it a prophet and asks if Lenore is in Heaven waiting for him (“Tell this soul with sorrow laden, if within the distant Aidenn, it shall clasp a sainted maiden, whom the angels name Lenore?”) The bird replies “Nevermore” further driving the man insane because he wants to be reunited with her.
The man orders it to go back to hell “Get thee back into the tempest…” and leave him alone because he’s sad. Bird replies “Nevermore”. By saying this, it can be concluded that the bird is the man’s everlasting sadness of his loss over Lenore that can NEVER be overcome. The bird demonstrates that his sadness can’t be overcome and it hurts the man’s feelings and breaks his heart. The Raven does not move at all in the last stanza and the narrator concludes that his sadness will be everlasting (“shall be lifted nevermore!”).
Poe does not try to make this story scary, he tries to make it creepy and ominous to the readers. No one has read a story about a bird terrorizing a man. It’s symbolism when the bird sits on the bust of Pallas. Poe tries to express the man’s sorrow to the readers and how he’s going to be depressed for the rest of his life. Thus, making the readers feel sorrow at the end, and a little bit creeped out for such a weird story. The main theme of the poem is that when tragedy strikes you, money won’t be able to buy you back your happiness.


I will be honest, I didn't like this story much. It was quite confusing and without a reference or a teacher to guide me, I would've been completely lost. So I thought of including the symbolism and meaning in the summary, just incase people don't understand it. Before I write a review, understand that this story is almost 150 years old.

People may like it because no one has ever read a book about a Raven terrorizing a man before. It's a sophisticated poem meant for people back in the day.

I would recommend this story for more mature readers and people who actually take the time to go indepth with the story, unlike me.

The story contains a lot of symbolism and rhythmic pattern that are hard to see, which is why I didn't like the story much in the first place! If you are more of an easy and relaxed reader who likes to receive info orderly, then I wouldn't recommend this book to you.

Posted by Teen Speak at 5:59 PM No comments: