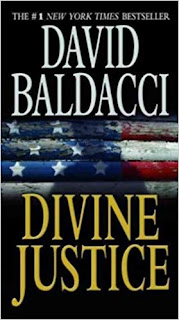 A former government assassin, John Carr, tries to leave his old life behind after making two more kills. One man is a senator, and the other is the director of the CIA. They are the same men that ordered a hit on his own family after he tried to leave his job as a government sanctioned murderer. However, his old boss, Macklin Hayes, sends men after him. John, after changing his name to Oliver Stone, decides to settle down in the small, rural, coal-mining town of Divine, Virginia. John quickly becomes popular and loved in the town, and starts to relax. However, the town is not what it seems- something strange is going on, creating the same violence that John was trying to get away from. His friends catch word of the manhunt after him- and try their hardest to deter Joe Knox, the leader of the hunt. However, Knox is starting to believe that Carr is a good man- and Macklin Hayes is hiding something big.

I enjoyed reading Divine Justice by David Baldacci. It is an action-packed, interesting book that is filled with excitement and suspense. I liked the storyline and the different, realistic characters that Baldacci used in the book. The way he described the action was superb, and very detailed. However, some parts of the novel didn't seem realistic, and the ending seemed too ideal. I think that people who like reading spy novels or mystery novels would really enjoy this, as well as anyone who likes action novels. This book made me think of the illicit things that our government probably does, and made me feel sorrow for Carr's family. I would definitely recommend this book to others, as it is a action-packed thriller of a novel.


Reviewed by NK, Grade 10
Montrose Library
Posted by Teen Speak at 10:20 AM No comments: 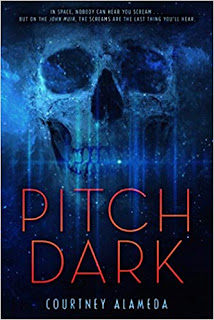 Pitch Dark by Courtney Alameda is a science fiction thriller that takes place in space. The main characters, Tuck and Laura, are totally different. Tuck lives on the spaceship Muir, where he woke up from stasis- four hundred years in the future. The ship is deteriorated, and many of the others who woke up from stasis are mutated and monstrous, pollutants from Earth having changed their genetic makeup. Along with the other normal people, they make a strange civilization on the Muir- one where they must avoid the creatures at all costs. Laura Cruz is the daughter of a famous shipraiding family- they are searching for the Muir, which might contain samples of bacteria necessary to replenish the soil back on dying Earth. Laura has a problem too- a rival shipraiding family, the Smithsons, has their eyes set on stealing the Cruz fame and glory. When a terrorist takes over the ship and collides it into the USS John Muir, Laura meets Tuck and quickly becomes friends with him. They must battle their way to safety, find the bacteria samples, and expose the Smithsons, and maybe even save the world.

In my opinion, Pitch Dark was a great novel. It was filled with action, betrayal, and it was set in space. Who doesn't like a novel set in space? I really enjoyed the sci-fi aspects to the novel , and the story and dialogue were great. The world building (of the massive, eerie Muir) and the political strife between the shipraiders and the terrorist group was also very interesting to read. Honestly, I don't think I disliked any part of the book. The book made me think of how much we're destroying the Earth even now, and made me feel intrigued at the mentions of deep space exploring. People who enjoy science fiction novels and action novels would probably love to read the novel. The navigation of the Muir's passageway almost read like The Maze Runner (James Dashner) and the description of the way the monsters hunted and attacked was very Quiet Place-esque. All in all, I think that lots of people would enjoy this book and I recommend it if you want a suspenseful read.


Reviewed by NK, Grade 10
Montrose Library
Posted by Teen Speak at 10:17 AM No comments:

A few sequels back, Jon got Garfield to go on a diet because he wanted his owner to stop making fun of how big his tummy is. It didn't last very long so in this sequel, Jon tries to get Garfield back up again but clearly his cat is stubborn nowadays. All Garfield would want to do is to splat his face down on his cat food, showing that he doesn't want to eat it. He would also pick on Odie as usual such as leaving him on a tree branch while he is begging for help or he would kick him and let him fly in the air, hoping he is experiencing misery in a negative way. One day, Jon notices Garfield is not losing any weight that he decides to take him to the vet and see Liz. Now what will happen next from all these weird misfortunes?

I liked how the author put some more unique graphics this time in this sequel since in the old books, it was usually basic ones that are usually repeated. The images are bold which is a good thing because it helps attract the reader to reading these visuals more and he or she can see what the author/illustrator is trying to express. I just don't like how the author put a little too much writing in the word bubbles because this is a comic book and I think comic books are sources you can read by mostly looking at images and less words. While reading the beginning of the book, I felt like this is going to be interesting but while reaching for the end, it started to bore me because it felt like there was never going to be an ending. The book just seemed pretty long to me. I would recommend this book to all ages, especially this is a source everyone can read and it looks innocent for a little one to read as well.


Reviewed by Hannah Rachel, Grade 10
Downtown Central Library
Posted by Teen Speak at 10:13 AM No comments: