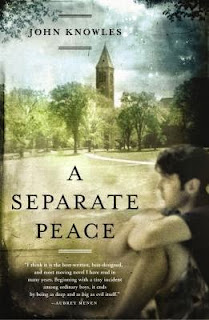 Gene and Finny are two great friends who went to the same school around the time of World War 2. Gene is quiet and smart while Finny is outgoing and athletic. During a period of time, Gene suspects Finny of trying to outdo him in academics and starts a private rivalry with him which ends when they are on a tree and Gene shakes the branch causing him to fall off and breaking their leg. Gene then starts the process of apology and mending their relationship.

Separate Peace, by John Knowles, was a very interesting book. The characters were both opposites in personality but the book found a way to show that they can still be together. The plot itself follows an interesting story which kept me occupied from the beginning to the end. The ending was great, and it really finished off the novel in a nice way. This book slowly but steadily became my favorite book, and I would recommend it for anyone. It was a great read.


Reviewed by Anonymous, Grade 9
Grandview Library
Posted by Teen Speak at 9:23 AM No comments: