That Was Then, This is Now by S.E Hinton 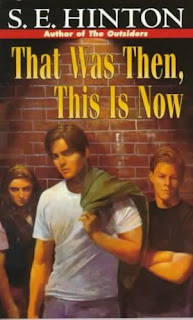 Two teenage boys Mark and Bryon have been living together for a very long time due to the loss of Mark's parents. Mark and Bryon have different personalities. Bryon likes to date different women containing many different kinds of characteristics such as Cathy while Mark isn't into encountering intimate relationships but although he really likes to try living the wild life of his own. During a typical day or evening, they would go to a bar so they could play a regular game of pool and they would always talk to Charlie about the Coke loans they have (mostly Bryon though). It is true that these two boys have been living their lives together as if they are really brothers but things in life seem to change. Mark is involved in a case where he has to sell drugs in order to help his family earn money and Bryon is the only one that knows which leads to him making a very hard decision. Should Bryon rat out Mark to the police or be kept quiet and let the proper authorities find out themselves?

When I first read this book, I thought it was a pretty decent one. It wasn't that bad taking a look at and I thought the cover looked pretty cool. In my opinion, I am in a neutral state in this book. It wasn't too good or too bad. Just okay itself. I have also read the sequel to this novel which is "The Outsiders" and I thought that it was a better novel than this. I'm not necessarily saying that this is actually a very bad thing to read though. Although in some of the scenes the book really got me good. I think that anyone can read this book even though there is some foul language so maybe I would not recommend a preteen reading this, such as an 11 or 12 year old. And there is a movie adaptation so maybe I would recommend a teen that is around 14 or 15 years old watching the film because the film tends to have more violence rather than foul language.

Labels: Fiction, S.E. Hinton, That Was Then, This Is Now

Georgia Peaches and other Forbidden Fruit by Jaye Robin Brown 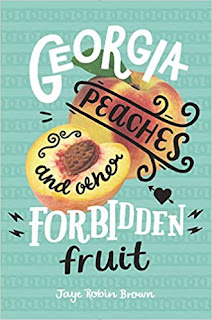 Joana Gordon is the daughter of an evangelicalist radio preacher. She lives in Atlanta with her best friend Dana and is about to start senior year. Her dad's sudden wedding with the pressure from his newest wife sends Joanna and her father from progressive Atlanta Georgia, to close-knit Rome, Georgia.
Afraid of losing followers, Joanna's father asks her to keep her sexuality under wraps, to pass as straight. Joanna, who has been dying to host a radio show for devout queer youth agrees, thinking that all it means is a change of clothes. When she meets Mary Carlson Bailey however, things get a little more complicated. Mary Carlson Bailey is the epitome of a straight southern girl, but that doesn't stop Joanna from falling head over heals for her.
Her growing feelings for Mary Carlson, the excitement of those feelings being reciprocated, and her growing friendships with those at Rome High school make it difficult for Joanna, who wants to keep her promise to her father, but is nervous what the cost of staying in the closet will do to the relationship between her and Mary Carlson.

It is very hard to find good lesbian romance for young adults, but Georgia Peaches and other Forbidden Fruit certainly fits the bill! For all of you who like a fairy tale ending with a touch of angst, this is the book for you. There is a happy ending, lots of conflict, hilarious side characters, and a lovable protagonist.

The protagonist, Joanna Gordon, is funny, relatable, and a pleasure to read about. The author's representation of Joanna's feelings when she pines after Mary Carlson, and when those feelings are reciprocated are spot on and will be pleasurable to read for any queer teen falling in love. The side characters in this novel are also fabulous, with their own stories and anecdotes.

This novel shows the struggles of a young very religious queer teen and describes Joanna's conflict between fitting in and listening to her family, or following her own path and staying true to herself.