Better off Famous, by Jane Mendle 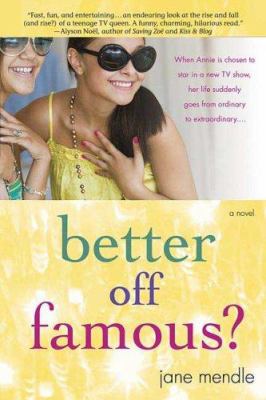 Being famous is awesome, right? Well, I guess that you could say that birthday girl Annie Hoffman is going to New York for her birthday. That was all thanks to an aunt that Annie didn't know about. Her aunt's name was Alexandra. Aunt Alexandra sent Annie a plane ticket for her birthday so that way Annie could meet her. Since Annie played the violin, she decided to go to the Julliard auditions in this fancy place in New York. But then, a producer that was going to be shooting a movie called Country Day was asking Annie if she wanted to play as Berry Calvin; a violin playing, sassy girl. When Annie started to go through the life of being famous, she had realized that the publicity and cameras were watching Annie with every move thatshe did. So with the new clothes, new style, and possibly her new attitude, will Annie really wonder if she is better off famous?

I love the book Better Off Famous, by Jane Mendle! I loved how a normal 16-year-old could do so much! I think that if you do some crazy things in your life; and you try to fix them up, they can make you be who you really are. This book really made me feel happy because if you think that you want to be someone else, you will know, that in the end, you will want to be yourself again. So don't delay, go to the library today! Make sure that you read this book called Better off Famous by Jane Mendle. Bye everyone and have a beautiful and lovely rest of your day! 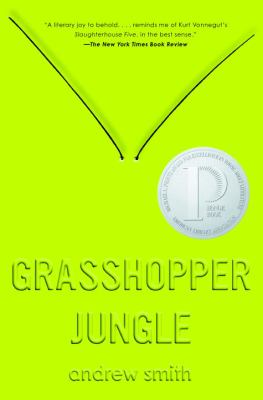 Grasshopper Jungle, by Andrew Smith, was about a boy named Austin Szerba, his best friend, Robby Brees, and his girlfriend, Shannon Collins, who all live in the small town of Ealing, Iowa. Throughout the book Austin explains to the reader about his Polish ancestry, how his family eventually got to live in Iowa, all the while struggling with his own identity and feelings toward Robby and Shannon. If that wasn't enough for him, after their confrontation from of group of boys from Hoover, Robby and Austin have to deal with the plague they let loose that turns ordinary people into six-foot tall carnivorous monsters.

Overall I enjoyed the book very much, it was interesting and unlike anything I have ever read before. There humorous parts throughout the book and I enjoyed the characters since they were well developed and changed a great deal. The author's writing was fluid and in my opinion he did a great job of combining the main character's past with what was already going on. It was an amazing well written book, and I'd recommend this book for teens and young adults who are interested in science fiction and apocalyptic books.