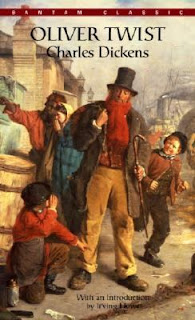 Oliver Twist, by Charles Dickens, is about an orphan. He stays nine years in a nasty orphanage. He is apprenticed to a person who takes care of dead bodies. Oliver decides to run away to London, where he finds Jack Dawkins and other orphans hired by Fargin as pickpockets. Fargin is kind however. Oliver is caught when he tries to pickpocket Mr. Brownlow who has a painting that looks very like Oliver. So Mr. Brownlow takes Oliver to his home and takes care of him. Oliver is happy there but Fargin is forced by a Mr. Monks to recapture Oliver. Oliver is brought back to Fargin and is sent to rob a house and is again caught and again taken care of the family. Mr. Monks wants Oliver recaptured again because he knows that Oliver has been left money from his father. Oliver finds out and also finds out he has some relatives alive. After Mr. Monks fails again to recapture Oliver, he goes to the United States, and Oliver lives happily, being adopted by the family.

This is a very good novel. It is a classic and also was very interesting. It shows how London was during the industrialization period and also shows realities about human character. It is emotion provoking as well as a page-turner. I really recommend it to anyone looking for something to read.

Spiral: The Bonds of Reasoning, Kyo Shirodaira and Eita Mizuno 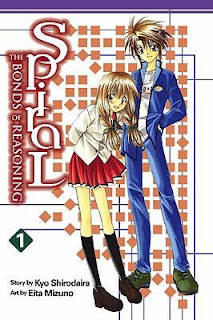 Spiral: Bonds of Reasoning by Kyo Shirodaira and Eita Mizuno is a mystery manga series that follows the young high school prodigy detective, Ayumu Narumi. His brother, Kiyotaka Narumi, another prodigy disappeared after pursuing the case of "The Blade Children" and leaving Ayumu and Madoka (Ayumu's sister-in-law, Kiyotaka's wife) with only one phone call. Madoka, who is a Lieutenant in the police, is faced with many cases that relate to the mysterious "Blade children" and Ayumu, being the prodigy that he is, gets involved and solves the cases. Also helping out with the crimes and murders is Hiyono Yuizaki, a resource of information who knows everything and anything, even top secret police records. All of these investigations are about the murder of people who are related to the "blade children" and they all end up involving the Narumi family in some way. In solving these cases, more questions arise and the "Blade Children" and Ayumu's brother's whereabouts become more bizarre and hard to figure out. This manga is a quest to find Kiyotaka and solve the mystery of the "Blade Children" before everyone Ayumu knows and loves dies.


I would recommend this book to people who enjoy deep thinking and twisted plot lines. There is also a substantial amount of graphic pictures with book and weaponry so these who cannot handle even cartoon blood, should not pick up this manga. This book is quite serious, however there is also a comedic element integrated to the story. There are more words in this manga than other mangas, on average so reading was enjoyable because there was actually a lot to read. I would definitely recommend the book Spiral: Bonds of Reasoning to anybody who likes manga or even anybody who just wants to read a good suspense and mystery story.