For all these past few weeks (or months), Garfield finally agrees with Jon about going on a diet. They started off this new lifestyle by eating less cat food and lasagna and eating more healthy such as savory truffles. Garfield gladly endures this pain he considers and hopefully he will get used to it. He only agrees to this new lifestyle only because Jon can stop making fun of Garfield's tummy and that way he can make it smaller. For now, we know this is going very well and successful since Garfield currently tends to pick the healthier choices when it came to food and just leave the unhealthy ones behind but will this be able to last a long time? A long time where he will be able to lose some of that body weight and be considered fit?

I think this sequel just became one of my favorite books in the Garfield series because of the graphics. They seem to pop up more than in the other sequels and there are more unique images this time. The book cover also seems to look more modern even though this sequel was written and illustrated around the late 1980s. One downside I could say about this is there is more writing on the word bubbles. I think this feature isn't that bad but this is a comic book and comic books are more about looking at visuals rather than more writing. While reading this, it made me feel the author did really try to make a change in his writing and illustrations. I would specifically recommend this book to little children and preteens because of how whimsical the images can be and this is a child-friendly book too as well. Basically, everyone of all ages can read the Garfield comics.


Reviewed by Hannah Rachel, Grade 10
Downtown Central Library
Posted by Teen Speak at 10:11 AM No comments:

Ace of Shades by Amanda Foody 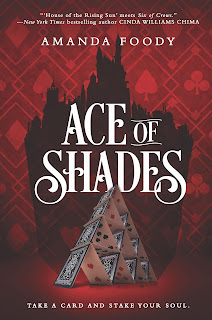 Enne Salta, a well-mannered young lady from Bellamy, travels to New Reynes, the so called "City of Sin," in search of her missing mother. A letter from her mother guides her to the most famous con man in the city- a street lord known as Levi Glaiyser. Levi has his own problems- if he doesn't play back a debt in ten days, then he will be invited to the shadow game- a legendary game where the invitee always dies. Enne is taken on a adventure around the city where she finds out that her mother was not what she seemed to be- and finds a secret about her heritage that, if publicly known, would cause her immediate assassination. When things go wrong for Levi because of his huge debt, Enne must step in to try and help him out before he is killed by the shadow game.

I really enjoyed this novel by Amanda Foody. The way the city of New Reynes was described was fantastic, and the character development of both Enne and Levi made sense and was interesting to read. I liked how detailed everything was- you could almost see the city and the gangs described. I think that fans of action, adventure, and a little bit of magic would like reading this novel. This book was suspenseful and exciting in many places, but it was also sorrowful and morose in others. All in all, I think that Ace of Shades is a great book and I recommend that everyone tries reading it.


Reviewed by NK, Grade 10
Montrose Library
Posted by Teen Speak at 10:07 AM No comments: 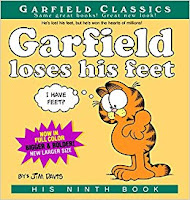 Jon observes Garfield from time to time when it came to his hobbies. Garfield wouldn't want to do anything at home except the excessive consumption of unhealthy food such as lasagna or think of him constantly sleeping in his bed, hiding under his blanket, and not waking up to a good day which is usually during around noon. Jon decides to take Garfield somewhere he could describe exotic for a cat's wellbeing. So they both take a flight together to an area where it has lots of beaches, assuming Garfield will be on his best behavior whenever they are out in public involving an area that is not their local town. This means Jon is going to need to find ways he will keep Garfield behaved whether it is during their stay or in any flight.

I think this is one of my favorite books that is a part of the Garfield comic book series. The plot had got me somehow interested when I began to flip over the pages during the beginning of the story. Again, I thought the graphics started to look basic whenever I'd go to a new page and they looked the same to me or at least repeated based on what I saw in the last four sequels I've read. I would suggest the author tries to make the images look different. I would recommend this book to everyone of all ages because this is a child-friendly book.


Reviewed by Hannah Rachel, Grade 10
Downtown Central
Posted by Teen Speak at 10:01 AM No comments: