The Last Kingdom, By Bernard Cornwell 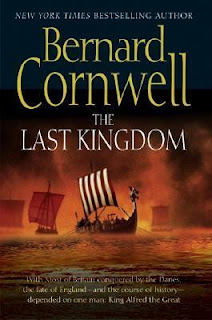 In The Last Kingdom, part of the series Saxon Tales by Bernard Cornwell, Osbert is 10 years old and the second son of Ealdorman Uhtred, Lord of Beddanburg in Northumbria, present day Eastern England. The Danes raid England and Osbert's brother and father are killed and he is re-baptized as Uhtred. After attending an attack on Danish fortress Uhtred is captured and taken by the Danes. Uhtred's uncle takes the fortress of Beddanburg from him and Jarl Ragnar adopts him.  As Uhtred grows he harbors an immense love of the Danes but has clashes with one of the boys, Sven, son of Kjartan. When Sven does something wrong Ragnar destroys Sven's face and throws his father out of his service. Years later he is attacked by a grown Sven and older Kjartan who kills Ragnar and Uthred runs away back to the English where he joins King Alfred of Wessex. He sails with the fleet of Twelve ships and makes new friends. After a battle with the Danes he meets Ragnar the younger, Ragnar's real son.  They become the best friends , but Uhtred has never fought in a shield-wall and his challenge is met when he finds himself fighting in the battle of Cynwit...

This was the best book I've read so far. I loved how historically accurate this book was. I was completely blown away by this type of writing and I cannot read anymore books because they all seem shallow compared to this one.  I would give it a 10/10 rating. I highly recommend this book to anybody who likes historical fiction.

Soul of the Fire , by Terry Goodkind 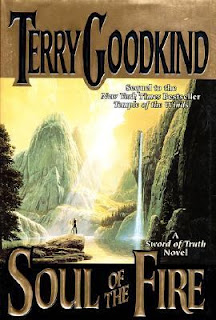 In the book Soul of the Fire  By Terry Goodkind, Richard Rahl who used to be a woods guide has turned into an Emperor of the D' Haran Empire, a war wizard, the Seeker of  Truth, and his newest title, husband the Kahlan Amnell, Mother Confessor of the Midlands.  Their wedding is the key that breaks the seal to a magical spell which consumes all magic, the world is threathend to be turned into lifeless waste.  Richard and Kahlan must travel across the Midlands in order to stop the spell, and along the way try to stop an invading  empire. As Richard learns there is no place as dangerous as one without magic....

I liked this book a lot. It was very well written as a fictional book, with imaginary characters and people whom seemed real and understandable, unlike most fiction books.  Goodkind's Soul of the Fire is a book about betrayal and bravery .I would give it a 7/10 rating...

The Lords of the North, by Bernard Cornwell 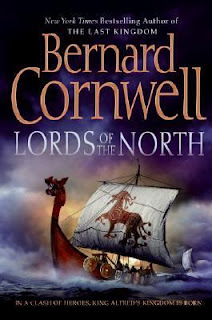 In The Lords of the North by Bernard Cornwell, Uhtred makes his way back to Northumbria where he was born, only to stumble into slave camp with his sworn enemy Sven.  There he tricks Sven and frees a slaved Danish king by the name of Guthred.  There he becomes captain of his guard until he is betrayed, but Guthred who sells him to a slaver named Sverri. After two years spent chained to the oar Uhtred befriends another slave named Finan. That second year a red ship frees them , and the red ship being Ragnar the Younger ship.  Later Uhtred and his companions again travel to Northumbria and in the darkness capture Dunholm, Sven and Kjartan's impregnable fortress.  Uhtred leads Guthrum's forces against  Ivar Ivarsson's heavily superior force of trained Danish warriors.  Read The Lord of the North to find out what happens next .

The Third book in the series by Bernard Cornwell is as good as the first, because Cornwell never runs out of writing material. He constantly employs the work of writing with artistry making a beautiful composure of words. The Lords of the North is a book that I liked very much and would read again. As a rating I would give a 10/10 on this book ... 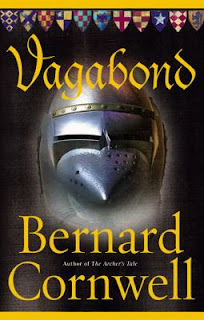 In Vagabond by Bernard Cornwell,  Thomas has been sent back to England to pursue his father's mysterious legacy which hints that the Holy Grail might exist and gets tangled with the Scottish invasion of 1347.  The Scots lose the battle and David II is captured .  He continues back to Hookton with Robbie, a catured Scottish noble.  Thomas and Robbie travel to Hookton and find that a Dominican has also been to Hookton. Thomas meets with his old friend  Sir Giles Marriott who gives him a book that his father wrote about the Grail .  Meanwhile a large army marches on La Roche-Derrien and lays siege to it hoping to lure the nearby English army out and defeat the only remaining army that is not in one of the Garrisons. Read on to find out what happens to Thomas as he searches for the most Holy relic in Christendom.

Needless to say Vagabond was another exciting book by Bernard Cornwell deserving a 10/10 rating.  After reading these books I cannot read any other ones, for every other book seems shallow compared to these books.  Very interesting and capitvating Bernarnd Cornwell again does his research and makes a historically accurate book.

Posted by Teen Speak at 7:07 PM No comments: 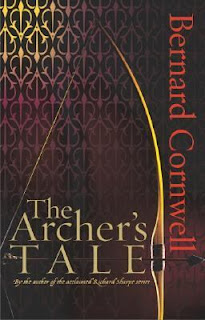 In Archer's Tale by Bernard Cornwell Thomas of Hookton is the son of a murdered priest, and is a nobleman by birth, but chooses to be an English archer fighting for Will Skeat in the hundred years war. Early on Thomas and his fellows, capture the city of La Roche-Derrien. Thomas 's makes his first mortal enemy , Sir Simon Jekyll. Thomas's band of archers lead raids on nearby French villages, and one day Jekyll's force is attacked by Sir Geoffrey and Jekyll is brutally beaten , but Thomas's archers save him. Later that night Thomas is ambushed by Jekyll's men and is beaten brutally, out of rage Thomas almost kills him, but runs away from the city of fear of being killed . With nothing else to do Thomas joins the assault on Ca en, and is surprised to find Jekyll who hangs him, but he is saved by Eleanor a young girl whom he likes. Thomas learns that his family was somehow connected to The Holy Grail. Read this book to find out how Thomas looks for the Grail.

Archers Tale is an amazing story that is historically accurate as well as interesting and captivating . Truly a work of art this book deserves a 10/10 for its accurateness and truly hooking storyline. I would recommend this book to anybody who likes histrical fiction, and interesting books alike .