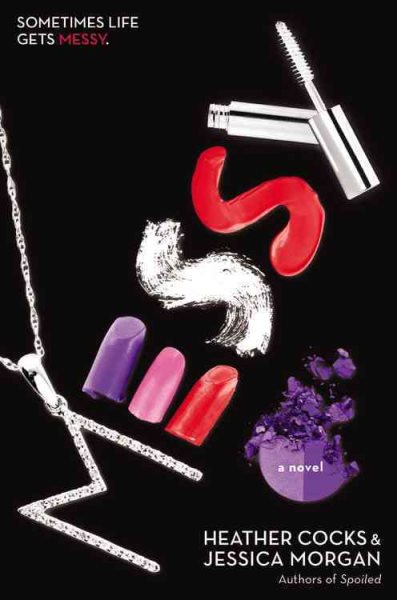 Messy, by  Heather Cocks, rewinds back to the characters Brooke Berlin and Molly Dix from the sequel "Spoiled". Few years after Brooke and Molly find out they're both sisters,Brooke gets this new intern for her magazine business. Her name is Maxine but people just call her Max for short. When Brooke hires this new intern,she doesn't easily trust this new girl. Instead,she tries to make sure if she is really some innocent girl trying to get a good paying job or that if she works for her sister Molly who she doesn't really like in which some clues would bring up this mystery.

I liked the story but I think that it was a little bit too long for a teen's novel. I think that this novel should be in the library's shelves for a young adult book. While I was reading this book,I felt like the story was a bit dragging. It kept giving so much detail rather than the main point of view of the story. I also felt that the story wouldn't have some particular ending. The only thing I liked about the book is that there was this spice of romance. It had some interesting parts to the story which makes the book a good thing to read. Maybe if the story came to life such as making a movie out of it,it would probably be more interesting to see and fun to watch. So this is my opinion of the book. I'd give it a three out of a five.

Reviewed by Hannah Rachel, Grade 9
Downtown Central Library
Posted by Teen Speak at 11:15 AM No comments: Rewind, by Jan Page, is all about a rock star named Liam Murphy. He ends up dying from an accident during a performance with his friends CJ and Gemma in which a falling speaker falls on him while singing. But it doesn't end there. After his death,his soul went back in time to when his parents' are teenage rock stars because he realized that he had to know a truth leading to something very important. Then,while finding some clues,he got some help from a guy Weird Wally. What will the one and only Liam Murphy find out?

I couldn't really understand what the novel was talking about. I think maybe the author put a lot of unnecessary details in the book which would make the reader feel bored and not interested into reading the story anymore. I also didn't understand the ending either. I wasn't even sure if it's supposed to be a happy ending or a sad one. And I think that the cover of the book looks a bit boring. I mean I don't think yellow and black mix as a book cover if you want to make it more appealing to readers and other bookworms. Maybe young adults would like reading this. Especially boys since it is a rock star story. And maybe an 18 year old should read this because I think that there is some inappropriate scenes that you may visualize in your mind. I mean I wouldn't want to read this again but maybe I would in the future because I feel like I'm still too young to understand these kind of things. And I have to be honest here,if I had to rate this out of a five star rating,then I'll have to say a two out of five. So if you're a young adult rock star and you're a bookworm half of the time,then I recommend you to read this.

Reviewed by Hannah Rachel, Grade 9
Downtown Central Library
Posted by Teen Speak at 11:23 AM No comments: