The Adventures of Huckleberry Finn, by Mark Twain 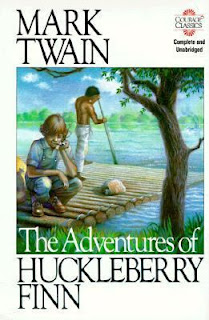 In The Adventures of Huckleberry Finn by Mark Twain, Huckleberry Finn, previously introduced in the novel The Adventures of Tom Sawyer, is a rebellious and independent boy. Readers find out that Tom and Huck received $6,000 apiece from the previous book. Then, Widow Douglas adopts Huck to "civilize" him. Huckleberry is required to go to school and even pray before meals despite his prior laid-back life on the streets. Huck is also forced to have spelling lessons with Widow Douglas' sister, Miss Watson. That evening, while everyone is asleep, Huck hears a "me-yow! me-yow!" Huck climbs out of his window into the ground and sees Tom Sawyer. While tiptoeing along a path, Huck trips over a root and Miss Watson's slave, Jim, hears them. Eventually, Tom and Huck make a quiet get away and meet some boys to form a gang, "Tom Sawyer's Gang." As Tom is adjusting to his new life-style, he sees footprints in the snow. He identifies that the footprints belong to his father. Huck sells his six thousands dollars to Judge Thatcher for a dollar. Pap, Huck's drunken father, and Huck meet up and go to Jackson Island. To escape Pap, Huck sets up a murder scene so everyone thinks he is dead. While roaming Jackson Island for a few days, Huck runs into Jim, Miss Watson's slave. they plan to run away together. What will become of Jim and Huck?

I really enjoyed this novel because I was able to get more familiar with the character Huckleberry Finn despite his brief introduction in The Adventures of Tom Sawyer. I was impressed how Huck tried to go with his new life style regardless of his image in the past. This book is bery exciting and full of adventure.