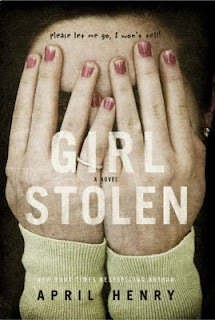 Girl, Stolen by April Henry is about this girl named Cheyenne Wilder, and what happens when she gets kidnapped by accident. Cheyenne Wilder is sleeping in the back of her stepmom's car while her mom gets medicine for her. Suddenly Cheyenne realizes that their car is being stolen. The kidnapper, Griffin, hadn't meant to kidnap Cheyenne, he really just want to steal the car. Once Griffin's dad figured out that Cheyenne's father is the president of a powerful corporation, everything changes. They now have a reason to keep her. Cheyenne has to survive this nightmare. Not only is she sick with pneumonia, she's also blind.

Girl, Stolen is a very suspenseful novel. This book is constantly interesting and never bored me. My favorite aspect of this book was how brave and resourceful Cheyenne was and how thoroughly her blindness was integrated into the story. Her blindness was presented in a believable and enlightening way, and I liked that she was so smart and capable. This was such a fascinating read. It was thrilling and fast-paced, I literally gasped a few times! The story was told from alternating view points and sometimes this can be distracting, but here it really worked well. Both main characters were really well written

Between the Lines, by Samantha Van Leer 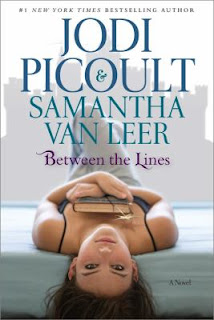 In Between the Lines, by Jodi Picoult and Samantha Van Leer, Oliver has lived in a fairytale book for as long as he can remember. All his life he has said the same lines, fighting the same battles, walking the same paths. But when the book is closed, the characters are permitted to do as they please. Unlike his companions, he has tried almost everything to escape the prison. Like Oliver, Delilah McPhee is an outcast in the high school bustle. One day, Delilah opens the book and Oliver attempts to talk to her. Surprisingly, they are able to communicate and fall into a deep love. The only obstacle in their way is the paper prison Oliver is held in.

I really did enjoy this book because it tied fiction and reality together well. The book looks really long, but it's mostly the pictures. During the story of Delilah and Oliver, the author goes back to the tale Oliver is supposed to play. It was strange reading the book because it jumped from one story to another. But overall it was a very enjoyable to read. There were some unpredicted twists in the story that I didn't see coming. I definitely suggest this book to those who like the fairytales or the sweet love stories. This is also a good read for those who have an artistic eye.


Reviewed by Alyssa, grade 9
Posted by Teen Speak at 11:00 AM No comments: 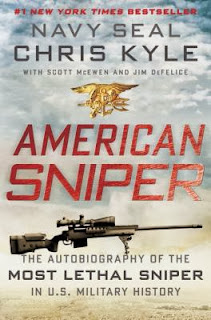 American Sniper, by Chris Kyle, is an autobiography of the most lethal sniper of all history, Chris Kyle. He shows us how life was as a Navy Seal and how exhilarating and dangerous the battlegrounds were, where he had over 160 confirmed kills. He also tells how he handled family at the same time.
This book was suspenseful. I liked all the action and details of his firefights. I believe young guys would enjoy this book. It made me think about how brave our soldiers really were and how much they sacrifice for our country's safety.