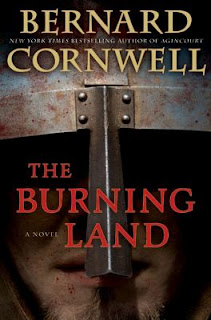 In The Burning Land by Bernard Cornwell  King Alfred urges Uhtred to swear to serve Alfred's son and presumed heir, Edward , in the same way. "Uhtred is unwilling to make that commitment, however. He has long wanted to return to his family's stronghold at Bebbanburg in Northumbria and to deal with his uncle, Aelfric, who stole the family properties and titles for him when his father died. He wants his obligation to Alfred and Wessex to end when Alfred, now seriously ill, passes away. Uhtred delivers a message to the Danish Jarl (earl) Haesten, whose fleet threatens Wessex, that Alfred will pay a large ransom for Haesten to leave.  Bishop Asser uses the mad brother Godwin to denounce Uthred's name. Uhtred flies into a rage and kills Godwin. Uhtred retreats to his house, where Uhtred's old friend and mentor, Father Beocca, tells him that Alfred has ordered Uhtred to pay a huge fine and swear an oath to Alfred's son Edward the Aethling. Uhtred breaks his oath to Alfred and sails, with his warriors to Dunholm, his old friend, Ragnar's fortress. Uhtred plans to attack Wessex as revenge but Pyrlig reminds Uhtred that he has given his oath to serve Aethelflaed. Learn how Uhtred saves a crumbling kingdom from a horde of Danes....

Currently the last of the series The Burning Land was a very interesting book captivating, and ingenious. Again one of the best series that I have read so far continues to get better, and improve on the orignal books. Very exciting, I would recommend this book to anyone who likes historical fiction, and appreciates books of interesting events and stories. Narrated for a first person point - of - view you feel like you are actually in the story. As a rating I would give The Burning Land a 10/10.