The Ugly American by William Lederer and Eugene Burdick 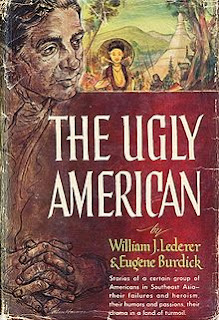 "The Ugly American" features a candid look into to America's international politics during the 1950s. It follows the story of multiple men abroad in Asia, showing the reader what life really looked like in the midst of international affairs. While all characters were created by the authors, they truly come to represent the real people and events of the time, and trust me when I say it really was ugly. From racist regards to painfully ignorant remarks, most of the American men did anything but make a good impression. This book was widely recognized to be controversial for it's time because of how openly it addressed it's topic and content.

While the actions of some characters may be extremely frustrating, this story paints a historically accurate picture of what these events really looked like. The writing is great, but accompanied by the creative way the story follows each person, you get a really amazing book. The reader is constantly made to question the values of American culture. This book is eye opening and overall very entertaining. I would absolutely recommend this book to any historical fiction fan or even someone with an interest in politics. Especially in the political climate of today, I would call this book a must read!


Reviewed by Isabella Robles, Grade 9
Montrose Library
Posted by Teen Speak at 11:53 AM No comments:

Romeo and Juliet by William Shakespeare 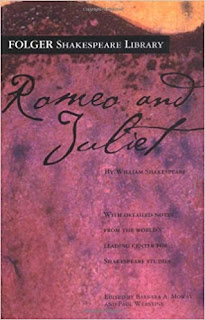 The Montagues and the Capulets are two rival families because they hate each other from dark pasts they have. We have Romeo, who is a Montague with a golden heart, and we have Juliet as a Capulet. These two people used to have their own love lives for other people. Romeo used to want Rosaline and Juliet desired Paris, but here's the trick: while looking for their own people at a party hosted by the Capulet family, they apparently didn't succeed, so instead Romeo and Juliet end up running into each other during a dance and love blossomed between the two. They both kissed secretly and during the aftermath, they realized what they had done is a sin because both of their families hate each other. So despite that, they decide to get married in secret with the help of Friar. Let's hope that the Montagues and the Capulets do not find out about this marriage.

I thought this classic was pretty okay. I couldn't understand much of it first but from hearing the basic points of it many times from other people, I'm glad I at least got a better idea on what was happening here. The ending was a bit sad though. And the worst part was is since there are a bunch of movie adaptations to this, it looked even scarier. (I watched the 1968 adaptation of the movie by the way.) What I didn't like about this was the character Tybalt who is Juliet's cousin. He made me feel mad in some way whether it was me watching the movie or reading the play itself. I mean yeah true he is just a fictional character in the story but I still didn't like him but it doesn't necessarily matter because this is how the author really wanted the play to look before getting it published way back years ago. I really didn't like the English slang although. It made my life even more confusing but the beneficial part to this was there are some definitions next to the term that way I can understand it better. Pretty convenient. I really suggest watching the movie and reading the play to anyone. Well, I should probably say anyone with a passion for reading anything but agewise, I'd most likely say anyone who is like 14 or 15 years old because individuals around that age should pretty much get the basic ideas of this play because if starting at a very young age, they may not get the idea or gist this is trying to let out. I hope you guys enjoy reading this play because everyone in general loves reading Romeo and Juliet and besides, who doesn't love Shakespeare?


Reviewed by Hannah R., Grade 10
Downtown Central Library
Posted by Teen Speak at 10:59 AM No comments: