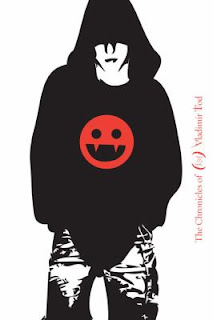 Eighth Grade Bites, by Heather Brewer is the first book of the series of The Chronicles of Vladimir Tod. Vladimir Tod is not just an ordinary kid that lives in the city of Bathory. He is a vampire, but just a young one. Vlad's parents perished in fire when he was about ten, so he didn't completely get over it. This story starts out at Vlad's house, on a Halloween. He received a blood bag from his Aunt Nelly, and left together with Henry, his friend, for a party. As they got to the party, they had some horrible time, so they came back. As Vlad continued on with his ordinary life, it was found that Mr. Craig, Vlad and Henry's teacher was missing. So a substitute, named Mr. Otis, replaced him. Vlad though he was suspicious because he kept giving him signs about vampires, such as giving him reports to do on them, or even coming over to his house to have a dinner and giving him hints. When Mr. Otis came to his house one day, he explained to him that he was his uncle, protecting him from Elysia, the vampire world. Nelly was captured by the leader of the Elysian society, D'Ablo. Vlad showed up to him with Oris, and they had a fight. Vlad used a weapon that was left by his father and ended up injuring D'Ablo very badly.

The Chronicles of Vladimir Tod is an excellent choice of book if you enjoy detailed events and some problems that all teens face, such as love. This book is usually bloody, such as when there is a fight between vampires, or even a vampire and humans. I find this book very enjoyable, yet worthy of spending time at the same time. I recommend this fantastic book to everyone that has interest in vampires, or just even actions.

The Pact, by Jodi Picoult 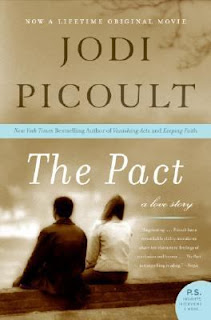 I started reading this book, The Pact, by Jodi Picoult, thinking that it would be a typical teenage romance but soon realized that the pact itself was much more than love. There is a boy, Chris, and a girl, Emily, who have grown up together ever since they were born. Their families live next each other and they do everything together until one solemn night rips them apart. Emily is found dead and Chris at the scene of the crime. He is hospitalized and then sent to jail for a long period of time. Charged for murdering his lover, detectives and lawyers work together to find evidence for and against him. The trial is built on an suicide pact but the truch comes out in the end.

The book is written so that one chapter is the present and the one after is a part of their lives growing up; the timeline of their lives is cut up perfectly leading up to the shot. I found Chris' and Emily's relationship touching. The trial taught me more about how court works. I would recommend this to anyone who has the patience to read through and not jump ahead to find out how it ends. 4/5
-Reviewed by L.G., grade 11.
Posted by Teen Speak at 2:26 PM No comments: 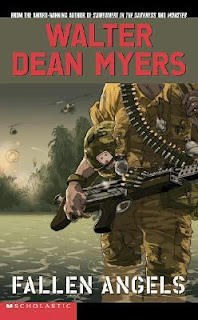 In the novel, Fallen Angels, by Walter Dean Myers, tells a sad story. Seventeen year old Richie Perry has just graduated from high school. He wants to go to college but can't afford it, and the streets are too tough. So he decides to sign up for the military and gets drafted into Vietnam. He meets Peewee, Lobel, Johnson, and Brunner. They are there for different reasons but share only one goal in common, getting out alive.

Tuesdays with Morrie, by Mitch Albom 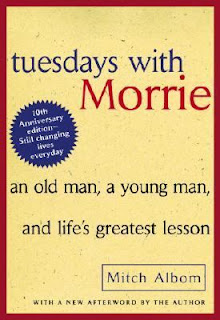 Tuesdays with Morrie, by Mitch Albom, is about a wise professor, Morrie, who teaches philosophy at a college. When diagnosed with AIS, his optimism overcomes his fear to die. One of his fellows students visit him every Tuesday. They talk about morals and ethies in daily life. Morris touches the heart of his ex-students also to cheer everybody else with his great attitude. But when Morrie dies, we all know his spirit never died.


In Tuesdays with Morrie, I learned a lot of ways of perceiving the world. It taught me how to be a better person. I learned a lot from this book. If you get this book too, you will also enjoy it. I guarantee you. It gave me an extra sense of optimism in life. So what I am saying, it's a great story and I highly recommend that you read it. It is appropriate for all ages. If you aren't surprised by it's great moral, I'll be shocked. But give it a try it is a great book.