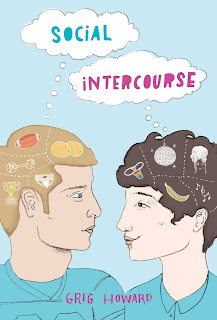 High schoolers Beckett Gaines and Jaxon Brock couldn't be more different. Beckett is one of the only out and proud gay kids in their conservative town of Florence, South Carolina. He is sassy, charismatic and has a spunky best friend, Shelby, a girl who was bullied for being plus size and never hesitates to defend anyone. Jaxon is the head quarterback of the high school football team, he is the most popular boy in school and has an equally popular evil cheerleader girlfriend named Tiffany. He has two mom's and lets everyone know that he won't tolerate trash talking about them, but he also has a secret. He doesn't like just girls. When Jaxon's mom and Beckett's dad start dating, the two boys come up with an elaborate plan to break them up- Beckett because he doesn't like Jaxon's mom and Jaxon because he wants his moms to get back together. Through saucy gay clubs, notoriousely homophobic church protests, and failed Grindr dates, the two boys realize very important things about each other, who they want to be, and what they are to each other.

Let me start of by saying that this box is not false adverting. This book is gay. It isn't a cliche perverted experimental affair about a forbiddan daliance. And it has a happy ending. What could be better than that? Unfortunately, the book was not as perfect as it sounds. Beckett, one of the protagonists has some major discriminatory remarks towards woman and people of color- just because he is a gay male, doesn't mean he isn't capable of discrimination. The church is also very negatively represented as well. This one isn't that large of a critcism actually, just an observation. The church has been very detrimental to the well being and safety of gay people for a long time and I know this from personal experience as a gay female, that the church is not always supportive of people like me. Fear not, gay people of faith, the church does make a positive appearence as well, supporting the PFLAG prom at the end. The gay representation though is on point- it acurately captures the feelings and wants of gay people without oversexualizing anything or going way over the top like some straight writers who have no idea what they are doing. The main characters, but not the side charecters have personalites that are obvious and their entire character is not just about their sexuality. Another warning, this book contains lots of graphic descriptions of guy on guy action- not a complaint, but if that isn't your cup of tea, stay away from this book. Shelby, the best friend is a tad cliche. She is plus size and sassy, an old and tired out stereotype and readers don't get a real feel for her personality. Last point- this book does handle some very important issues in a very good way like bullying and loyalty/ soliderity against discrimination and how important it is to stand up for people when they need it. All in all, a good book, well capturing a gay pov with only a few criticisms.

Posted by Teen Speak at 5:49 PM No comments: