The Queen's Governess, by Karen Harper 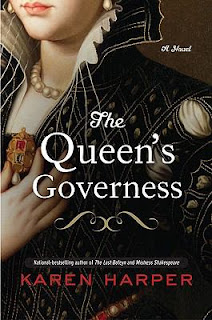 The Queen's Governess, by Karen Harper, is about, conceivably, one of the greatest Queens in History, Queen Elizabeth I has a story that shows countless sides of her. For the reason that her popularity went all over Europe, many stories were also told about the people closest to her. One story strangely left incomplete was that of Katherine Ashley, her close friend and confidant as well as childhood governess. Kat is the daughter of a young country squire who one day prematurely she meets Sir. Thomas Cromwell. With the help of Cromwell and her distant relatives Kat is transformed from farm girl to lady-in-waiting to Queen Anne Boleyn. Kat is with the Queen until her regrettable end in 1536. After that Kat is assigned to be the governess of the Lady Elizabeth. Their friendship forms into life long love and devotion. Kat stays with Elizabeth until her death. Katherine Ashley is one of the few people who survived the tower twice and the wrath of three of the Tudor monarchs.

This story is one of my favorites. It shows both the wrath of all the Tudor monarchs and the boundaries people will reach for friendship. I can read this story over and over again. Readers of books that revolve around history will truly adore this book as if it is their best friend. I truly enjoyed reading this book that was a twist on history. This book should be passed down from generation to generation.

To Be a Slave, by Julius Lester 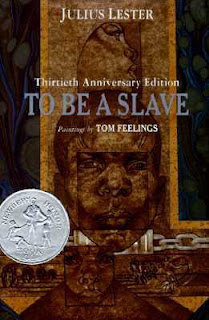 To Be a Slave, by Julius Lester, was one of the most moving books I have ever read provided with many detailed, first hand accounts of slaves captured in Africa by the English and Europeans and then taken to the new colonies in America. Full of greed, anger, frustration, sadness, horror, and pain, this book will set even the toughest heart aching for those slaves who went through so much sorrow. What I thought really made this book so amazing that I would recommend anyone to read, was the author gathered so many first hand accounts of slaves, songs that were made and sung by them, detailed drawn pictures, and a perfect accound of how EVERYTHING was in that time. Lester gives us detailed and vivid descrtiptions of the exact food a slave would eat, what they wore, how the celebrated Christmas, went to a white man's church on Sunday telling them how God places the white men above the blacks and they were to serve them, what the family did when separated at the auction block so soon after a new child was born and sold, and how slaves escaped slavery with many being recaptured. To Be A Slave is not a novel, rather it's a concoction of many the slaves lives and how they lived through coming from Africa, moving to working on plantations, and going through the Emancipation. I do want to forewarn you of gruesome events taking place because this book focus' on ALL of slavery, especially the stories that are not wanted to be heard. Though almost all slaves hated slavery and the whites for containing them, some felt slavery was life-helping and they lived their lives trying to please them rather than go against them. For me, three stories stick out the most in this book: Going to work in the plantations, mothers who had babies were to put them in a trough (similar to those where water was placed for horses) far from the plantations so the mothers could not hear their babies cries and go comfort them. One day, it began to heavily rain and the mothers were not allowed to reach their children until after their work was done. Running to the troughs, the mothers found all of their babies drowned and the slave owner didn't even pay them a penny for their loss. Another story is when, at the auction block, slaves were lined up like cattle and though starved for many days, the slave sellers would rub meat on the slaves teeth to make it appear they were eating healthy as well as dressing up fancy to make a good presentation while being observed and later bought. Families were torn apart at the auction block. A husband and wife were separated and their child too bought by a different slave owner. The mother ran to the slave owner and begged to buy her as well. All the slave owner did was smile and kicked her, laughing as he did so and walked away with his new slave boy. Lastly, a slave owner trying to move his slaves to a neighboring state so as to keep them from being set free, rode upon his horse chewing on some food while over 30 of his slaves, the women tried together with rope and the men latched like oxen in metal cuffs around their necks and arms, strode behid him. A mother with her calves distorted and body heavily weakened, knelt in the road as she could go no farther. The man didn't hesitate and immediately shot her in front of the road and continued his progression. Sadly, this book is so very real you'll feel the pain and hurt within the first page but it's so informative and written in a way that captivates the reader. So pick up the book and begin the story of the slaves.

The Invisible Man, by H.G. Wells 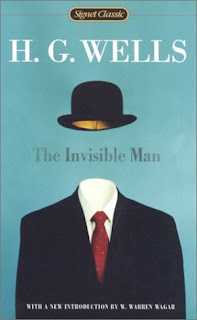 The Invisible Man, by H.G. Wells, is a wonderful book to read if you enjoy suspense and action. This book is about a chemist named Jack Griffin who comes to a small village to work on an experiment. He finds a way to create a formula to make himself invisible and this town is perfect because nobody knows him. The only one thing on his mind is to become invisible and terrorize and rule the world. He starts stealing money and scaring people in town and everybody is terrified of him. He becomes crazy when his secret is out and his notes are stolen. Get ready for an adventure when reading this book. It is a real page turner. I definitely recommend this book to teens.

Before I Fall, by Lauren Oliver 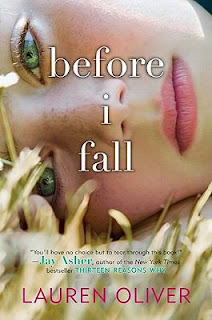 Before I Fall, by Lauren Oliver, was overall a captivating book. The unique style of the author's writing is complex and so mysterious. You must pay attention to many small details in order to understand future references. Readers have to have a good sense of foreshadowing and like to jump around in the novel. Before I Fall is about a completely average girl thrust into a not so average situation. Samantha Kingston, struggling to juggle her friends, boyfriend, and staying at the top of the pyramid of popularity, lives day to day as any normal teenager. Only, teenagers don't experience the same horror Samantha does. Coming out of a party with friends,Samantha gets into a car crash and dies. Everything was so vivid -- the screams, metal colliding, and bodies thrashing around. When Samantha died, she woke only to find the start of a new day...or was it? She remembered exactly what happened but no one else did. She is given a chance to redo her last day, seven chances in fact, until she changes her life to the way it was supposed to end. Trying to find what caused her death, how to change what has or will again happen, and learning to better herself and those around her, Samantha goes through the same day in the chapters. Personally, the book was amazingly well written for teens to fully put themselves in Samantha's place and to keep them laughing, crying, and burning through the pages. The only fault I could find was the book started to get too repetitive. Because Samantha lived one day over and over again, the author repeated Samantha's words and actions much to often that I found myself skimming ahead to the new parts in the day. The conflicts and situations were very well thought out as each new day would only solve a portion of the mystery which kept me reading. In the end, she made so many rights choices for herself and the book will definitely give teens a positive view of life and how to cherish it, but will seem like a teen wrote the book instead of an adult with the humor and feelings so many of us struggle with today. I would recommend this book to all teens because of the overwhelming amount of feelings the characters go through, that the readers will feel an instant connection with. However, those who get easily confused may find themselves having to go back to pages and consult other chapters to understand what is happening. 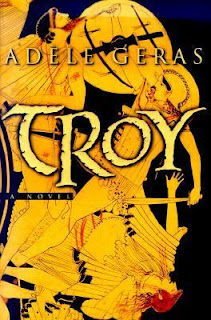 This book, Troy by Adele Geras, retells the story of the Battle of Troy, with a new perspective. It demonstrates the fictional stories in the heart of the city. The story begins 10 years into the war. This book is an exceptional read for someone who enjoys romance and history; particularly Greek mythology. It's adventurous and riveting.

-Reviewed by Jackie, grade 9.
Posted by Teen Speak at 4:56 PM No comments: