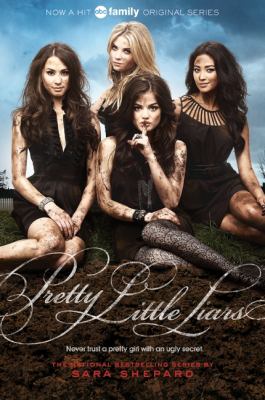 Pretty Little Liars by Sara Shepard is the first in the amazing series. Alison DiLaurentis is Rosewood's prettiest, most popular girl. And let's not forget her clique of Spencer Hastings, Aria Montgomery, Hanna Marin, and Emily Fields. But right before eighth grade, Ali disappears only to have her body be found three years later under cement in her old house. Since the disappearance, the other four girls have drifted apart, but are reunited by Ali's finding. The girls all suddenly start receiving texts from an unknown person who calls himself "A". "A" knows all of their old secrets along with stuff that is going on now. What are the girls going to do? Will they discover who "A" is?

To be honest, the only reason I started reading this series was because I had fallen in LOVE with the television series. Sara Shepard had a great idea, and she wrote it down with spectacular skill. I would recommend this book to all teen girls because they will be able to relate to the girls' points of view and will be more interested in the book.

Rich Dad, Poor Dad by Robert Kiyosaki is about the author himself who tells the story about two fathers. One is his biological father, and one is his best friend's dad. The biological dad is the poor dad, and the friend's dad is the rich one. The author compares both fathers and how they taught him many different things about life, and how the rich dad is different from his dad. The author learns many things from both of them, yet does not know which one is right. The poor dad is the one who tells him to do well in school and have a good job, and the rich dad is the exact opposite and tells him that you should just enjoy life and do what you want. The author becomes lost and does not know which path to take. This novel was a unique one to me because it had an interesting point. It not only keeps you excited, but also teaches you many things, like what is right and wrong. I would recommend this book to those who like to read true life stories. This was a well-written book, and I would rate it 10 out of 10.

Reviewed by Alen, grade 12
Posted by Teen Speak at 6:34 PM No comments:

Faces of Fear, by John Saul Faces of Fear by John Saul is about a fifteen-year-old girl named Alison Shaw. Alison isn't good looking, but she doesn't care. She'd much rather read a good book than to stare at the mirror. But Alison's gorgeous mother, Risa, believes that beauty is the most important thing in life and that without it, you won't live life the way you should. When Alison's mother marries a plastic surgeon named Peter Dunn, they move to a different city. Alison and her mother are surrounded by beautiful people in the city. This is when Alison trusts Peter Dunn and agrees to undergo her first procedure. A while after the surgery, Alison begins to notice the resemblance between her new face and Peter's first wife's face. Alison soon discovers dark secrets and realizes that her worst fears are fast becoming reality. This is one of the best books I have read so far; no wonder it is a bestseller. I would recommend this book to anyone who likes to read thriller novels. This is one of those books in which you keep on wanting to read. I would rate this book 10 out of 10.

Reviewed by Alen, grade 12
Posted by Teen Speak at 6:32 PM No comments: