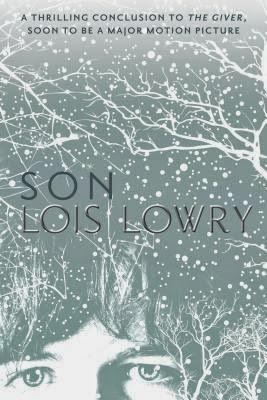 Claire is a 14 year old girl living in a utopian society. Everyone is given a job at the age of 12, based on their interests, and Claire was given the job of a birthmother. Now she is having her first child known as a product but something goes wrong during the procedure. Claire knows nothing other then the fact that unlike the other birthmothers, her product was carved from her stomach. She is moved to the fish hatchery because she is told that her body did not function properly for a birthmother. Over the months,Claire secretly visits her son at the Birthing Center, and soon finds out that he is not ready to be put in a family and might even be released. After hearing this tragic news, her son is kidnapped and taken over the riverbank. Now Claire sets out on a mission to lands beyond her community in order to find her missing son. She is willing to do anything it takes to find him.

I believe Son, by Lois Lowry, was a great ending to the book The Giver.Both the Giver and Son, take place in the same community but are written in different peoples point of view. I found it very interesting how characters from the first book appeared in the last book. I mostly love the main character, Claire because unlike everyone else in the community, she is different because she cares about the son she bore. For years, she struggles and works hard just to see her son again. I believe people who like science fiction and adventure will love this book. It was a great finale to the series.