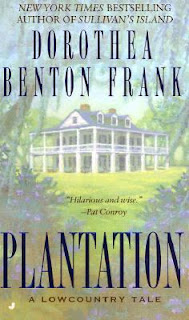 "Plantation," by Dorothea Benton Frank, is about a woman named Caroline that falls in love with one of her professors at her University, a Psychology teacher named Richard, at first sight. They get married and have a child. As time goes on they find out that their son Eric, wasn't exactly like all the other children, like in writing. Despite some minor differences, Eric a very smart boy. Caroline's husband Richard was married once before, and has another son one or two years older than Eric. He favored him more, and this upset Caroline and Eric greatly. Soon, Caroline catches Richard cheating on her with his ex-wife, Lois. After all the things he had put her through, Caroline had finally had enough. She gets a divorce and, with Eric, moves back to South Carolina, and in Tall Pines, to live with her vivacious mother, the "Queen of Tall Pines." Caroline had thought she had hated her mother after her father died, but as time goes on, she realizes how much she really loves her.

I absolutely LOVE this book. Its hilarious, and full of sarcasm that you can't get enough of. I recommend this book to everybody, more so to those who like humor, romance, and drama. You won't be able to put the book down. 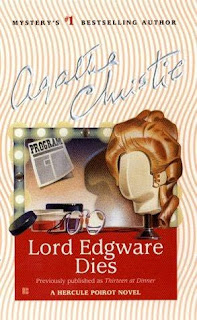 Agatha Christie, a world renowned mystery writer, had captured my interest from the first time I read her in Lord Edgware Dies. A suspicious death, a soild alibi, and complex characters are all pieces to this puzzle-like story. Jane Wilkinson, a past actress had come to Hercule Poirot (the main character, and famous detective) about her miserable marriage when her husband had died the day before. Hercule Poirot must use his best of skills to crack open this case.

This was the first book I had ever read by Agathie Christie after being a steady fan of Sherlock Holmes. Once I started, I needed to know the truth. This urgency to find the murderer came over me every time I would pick up the book and when I put it back down. The Queen of Crime has an unique of talent of descibing each character in such detail that they become alive, but yet you always began to doubt who they actually were. Each person throughout this book was surrounded by an aura of suspicion. It drove me crazy because I could never be confident in my guesses who the real crime-committer was. Yet, the clues were so subtle and well-hidden that even if I read so slowly, it took more than an hour to read a chapter. I could never catch a clue. When Hercule Poirot explains, he makes it sound so clear and obvious. There were some traits about this book that I, however, disliked. I seemed disorganized and the dialogues were confusing. It took you to one scene to another, and Christie did not explain why we had suddenly switched settings or do so in a vague way. It was hard to follow the sequence of the plot. The conversations between Poirot and the other characters were also difficult to understand. The way it was formatted and the slangs used added to the confusion. I may have been my limited in my knowledge of past manner of speaking in old England, but I could never grasp what the character was saying because it was mostly made up of slang.
If I had to give this book a rating, it would be four out of five stars. This is not a book that once finished it just becomes part of the shelf. Throughout the story and once it ended, questions interrupt your train of thought and analyzation of every clue must take place. This is a book that I can never forget. I recommend Lord Edgware Dies for fans of mystery and those who are seeking a dark, suspenseful book that they can lose themselves into.
-Reviewed by Sophia, grade 9.
Posted by Teen Speak at 2:43 PM No comments: