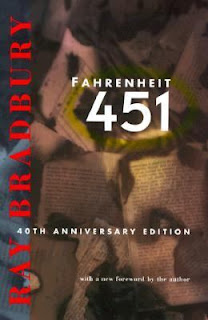 Fahrenheit 451, by Ray Bradbury, features a futuristic world where reading is illegal. Guy Montag is employed as a "fireman." Ironically, his job is to burn books. On his way home, he meets his new 17 year-old neighbor, Clarisse McClellan. They have an awkward talk and then Guy leaves. The next day, he goes to work and tries to pet the Mechanical Hound. It growls at him and threatens him. After a while, the alarm rings. They go to burn an old lady's house because of an illegal possession of books. When they push the lady aside, a book falls into Guy's hands. Thoughtlessly, he hides it under his shirt. The firemen had no choice but to burn the house with her in it. Guy feels guilt and shame. Later, he decides to make copies of the book also known as the Bible with the help of his professor, Fabor. After changing his mind, he goes to work and gives the book to the captain of the fire department. Then, once again the alarm rings. The destination was Guy Montag's own house. What will happen to Guy's house? What will happen to Guy Montag?
Fahrenheit 451 was a very exhilarating novel. I was very impressed of how brave Guy was for taking the book. I found it ridiculous that books were illegal. This book kept me wondering, "What will our future look like?"
-Reviewed by Michelle, grade 9.
Posted by Teen Speak at 3:20 PM 21 comments: 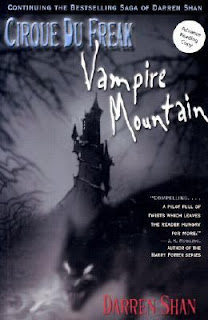 
The Cirque Du Freak series has once more amazed me. The detailed descriptions has fascinated me again. The first time I read this book, I was excited to get the next book right away. I recommend this book to all the horror fans out there. I'm positive that you will fall for the vivid imaginaton of the book.