Blood is Thicker, by Paul Langan 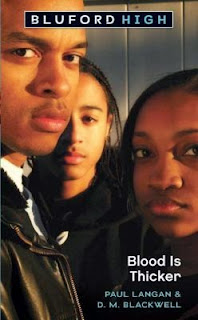 Blood is Thicker, by Paul Langan, is about a boy named Hakeem who has to move to a different house with his family because his dad has cancer therefor he isn't working and cant pay the bills. Hakeem gets pulled away from his girlfriend when he moves away to Detroit. When Hakeem arrives in his new house he meets his cousin who he used to have a connection with. His cousin used to be chubby and a nice person until he started going to the gym. In his new house Hakeem thinks his cousin is doing bad things because Hakeem sees hims sneaking out at night. Hakeem finds out his cousin is only going out to rap. Hakeem's cousin's dad finds out and Hakeem's cousin gets threatened to stop or get kicked out.

In my opinion I think this is a very good book because the ending is great. I also like how Hakeem's character acted in the story. I also liked that closed to the end Hakeem's cousin becomes friend's with Hakeem close to the end and Hakeem sticks up for his cousin that is in trouble. This book is part of the blue ford series that I like. I recommend this book to a lot of people you should read it.

Reviewed by RB, Grade 8
Library Connection @ Adam's Square
Posted by Teen Speak at 9:32 AM No comments: