Causes of the War by Tim Cooke 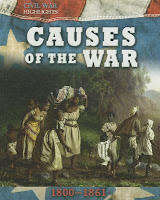 The story was about slavery that the people were from the Northerners. There were 3.5 million black slaves in the south. They had a good economy for the society that they had. They published really good books and they held lectures about the evils of the slavery. They had free soldiers for the Congress to fight for their constitution. They were free Solders that destroyed the slavery that abolitionists the constitution. After that the Mexican War had been ended at list 1848 and the slavery and the slavery had began again and there was a big problem with the constitution. The task ended by a person who killed Lincoln was named John Wilkes Booth at the Ford’s Theater in Washington D.C. After that he’d died the next day because John Wilkes shot him and he couldn’t survive.

The book inspired me because it was a really interesting book and I like to learn more about History because history is the first subject that I like. History talks about the revolution that happened so long ago. The history books teaches people about the old times that happened in 1864- 1999. My friends like to read History books because it inspires them to enjoy what they read and for them to learn something from history. History is my and my friends favorite because how interesting and how fun history is. History can be useful for the future when people grow they can know that what happened long time ago to the War. The civil war began a long time ago that they destroyed the black slavery.