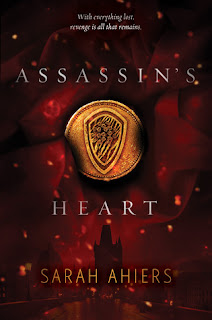 Lea is a Clipper, a paid wealthy assassin. She is also a Saldana, the highest family in the ranks of clippers and the rival family of the Da Via's, the neighboring clipper family. Only she is secretly seeing Valentino Da Via, the son of the Da Via's. Then she wakes one night to find her house on fire and her family murdered. Teeming with rage and grief, she heads to Yvain, a neighboring city where her banished uncle Marcello lives. But Yvain is across the dead plains where ghosts lie and wait for people to haunt. She races over the dead plains at night narrowly making it out alive. She then finds her uncle, who is less than happy to see her and his kind, but clumsy clipper apprentice. In exchange for his help, Lea agrees to train his apprentice. The two form an unlikely bond and together they plot to bring down the Da Via's.

I thought this book was very original. The plot of assassins is old, but the spectacular world-building in the novel and the intricate details of the plot blew my mind. The assassins are decided based on the families they are born into. Even the religious aspect of it, the assassins acting as disciples of a goddess named Safraela who says death is a gift was very well thought out. The romance was good as well, built on safety, familiarity, and compatibility. I also liked the motive of the protagonist because it wasn't selfless or kind- it was vengeful. Also, there was casual gay representation!! The world building was excellent but setting changes were just a little clunky. I think any YA reader would love this story, not just those who love fantasy. An excellent plot with relatable, broken, messy characters.