This Time Will Be Different by Misa Sugiura 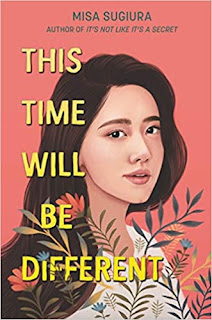 CJ Katsuyama is an underachiever. Her grades are so-so, she isn't involved with anything, and she doesn't have a Vision for her life and a Grand Plan to get there. In her uber driven mom's eyes, she isn't working hard enough, but when her family's flower shop, run by her hopeless romantic aunt starts losing money, she volunteers to work there. In Heart's Desire, CJ finds her passion, but when her mom wants to sell the flower shop to a company that sent millions of Japanese Americans to internment camps, CJ has had enough. She and her friends begin a protest to change the high school from the name of an oppressor to the name of a proud Japanese American landowner. And by the way, her mom works for the company that she is trying to sell Heart's Desire too. To add to the mix, CJ's longtime crush finally seems interested in her, her best friend Emily is starting to like the girl who broke her heart a long time ago, and a cute new boy, Owen, has started working at Heart's Desire. Over the course of the novel, CJ will find the courage to demand what she wants and stand up to those who stand in her way.

Misa Sugiura is Awesome!!!! Her first book, it's not like it's a secret was amazing and this second book was no exception. This book handles so many important issues, like a white savior complex, racism, sexism, and homophobia, and teen pregnancy very well. The main character, who is Japanese American takes a stand against a company who shares the name of her high school, a company will a long history of racism towards Japanese Americans and confronts a white girl about her role in becoming a white savior (she took the protest and centered herself claiming how she couldn't just stand by and do nothing). She also becomes pregnant, but this is not the forefront of her story, and when she decides to have an abortion, there is no moralistic angst and guilt accompanying it. Also, Casual. Lesbian. Representation! Her best friend is gay and CJ is very protective towards her especially when she seems to go back to the girl who broke her heart. All in all, I think that many readers would enjoy this book, particularly because of its unique story line and lovable characters.

Labels: Misa Sugiura, Realistic Fiction, This Time Will Be Different