The Bone Labyrinth by James Rollins 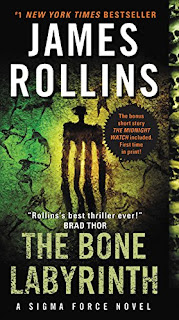 A strange subterranean cave in Croatia is discovered full of ancient hominin artifacts- ones that seem way too advanced for the time. However, before archaeologists can examine the site, they are attacked by Chinese operatives who seem to want to destroy the area. On the other side of the world, a primate research center is massacred and its main subject, a gorilla hybrid called Baako, is kidnapped. Sigma Force commander Gray Pierce is called in, and the chase is on to find out the true meaning around this attack- a chase that leads him around the world, learning secrets about Atlantis, human intelligence, and the ingenuity of our ancestors.

I enjoyed reading The Bone Labyrinth, as it talked about many interesting ideas and addressed some current issues in the world right now. Its discussion on eugenics, animal testing, and God was interesting to read. However, it seemed pretty lackluster- which isn't surprising, as James Rollins and other authors like him (Clive Cussler and Dan Brown) have cool ideas, but terrible writing. To be fair, it still drew me in and it was a great adventure story to read. Fans of Clive Cussler/Dan Brown's writing style would probably enjoy this. People who want a book that will entertain them but not challenge them in any way would like this book as well. I would recommend reading this if you enjoy action and conspiracy and want to pass the time.