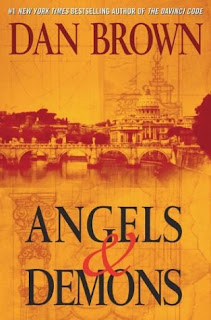 Director of the nuclear research facility, Conseil Européen pour la Recherche Nucléaire (CERN), Maximillian Kohler finds physicist Leonardo Vetra, who was also an ordained preist, murdered in his own living quarters with an anagram of the word Illuminati stamped on his chest. He calls for Harvard professor of symbology Robert Langdon, who arrives after a flight from Massachusetts and confirms that the seal is real. Vetra’s daughter, Vittoria, arrives soon after, and Kohler tells her of her father’s death. She finds her father’s eye missing, and Kohler informs them that the murderer has stolen a canister of antimatter from the research facility, desecrating Dr. Vetra’s body in the process to gain biometric access to the underground laboratory where the antimatter was stored. The canister had been placed somewhere in the Vatican, where the pope has recently died. It has a 24-hour battery that keeps the antimatter suspended in a vacuum. When the battery runs out of charge and the antimatter comes into contact with any matter it will create an explosion that will destroy the Vatican. Langdon and Vittoria make their way to the Vatican, where they hope to find the canister before the 24-hour timer runs out. However, they find that the four preferiti, the Cardinals that are the prime candidates to be the next pope, are missing. Langdon, Vittoria, Carlo Ventresca, Camerlengo of the Holy Roman Empire, Commander Olivetti of the Swiss Guard, and the Swiss Guard itself embark on a search for the four cardinals, in the hopes that it will lead them to find the antimatter and save the Vatican.

I enjoyed reading this novel very much. It was very interesting how the author, Dan Brown, mixed science with all the symbolism that is present as well. The mixing of these two was flawless in comparison to other novels I have read, that have not bridged as well and favored one aspect more than the other. Brown also kept a grand sense of realism for a story that involves such scenarios that seem less plausible than not. It was so well executed that throughout most of the novel, it seemed like all these scenarios were real. The novel did not seem so much as a novel, but more as a memoir or someone’s retelling of an adventure. All of this combined to create a book that always kept me entertained and wanting to read more.