The Story of an Assassin by Anthony Horowitz 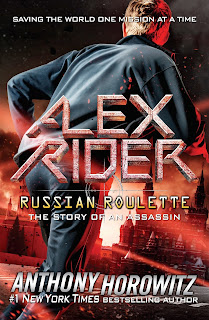 The story is about a Russian assassin that is reading his life story the day before he completes his mission. It starts off with this assassin arriving to London, he then books a hotel nearby the location of this new mission, he then makes it to the hotel, and gets his room. From there, he decides to leave the room for a little, then returns. He turns on his laptop and receives the coordinates for the location of the mission, and that's when he decides to read his digital diary a bit. He reads about his life living in his hometown in Russia, what happened that turned his life around, how his town gets blown up, how he escapes, how he becomes a hoodlum, how he gets enslaved on his first score, his life during slavery, how he manged to escape his slavery, and how he became an assassin.

The book is a masterpiece for its plot line, for its characters, and for its story. I mostly loved how good the story is, with a unclear beginning of this protagonist, an emotional roller coaster ride between the chapters, with the ones he loved dying before his very eyes, to the ones that made him suffer, suffer in his vengeful hands, and somewhat of a relieving ending. Now, I think that many artists or creative people would love this story. How it made me feel though can only be described as an emotional roller coaster. So yeah I would give it a 10/10.