Into the Wild by Erin Hunter 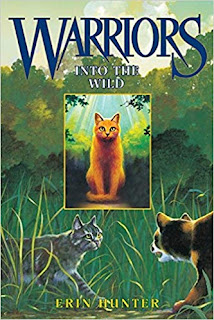 Rusty is a normal house cat. Sometimes, he dreams of going out into the forest to hunt like he knows others of his kind definitely do. One day, he finally gives into his dreams. He goes into the forest to hunt a mouse that he sees. As Rusty wanders farther into the forest, he runs into another cat. This other cat attacks him and asks his why he's in Thunderclan territory. This cat turns out to be Graypaw, a Thunderclan apprentice who later becomes Firepaw's (previously Rusty) best friend, and his guide to the life of clan cats. Now a truly inducted clan cat, Firepaw must act in accordance to the rules of the forest, and must solve mysteries that nobody knew even existed.

This book is the first in a series that I really enjoy. Despite the fact that it's more aimed toward younger readers than older ones, the story is a really easy one to follow, and the plot is pretty predictable, making it a very nice light read for kids and teenagers alike. The Warriors series is one that flows very smoothly, despite having been written by four different women. It is definitely as book that I would recommend to kids and teenagers, as well as cat lovers everywhere. It is totally one of those books that you would read again just for the fun of it.