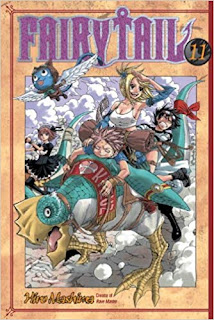 During the past couple of volumes of Fairy Tail, Erza has been trying to overcome her struggles such as her being forced to sacrifice her life for her old guild master. In this story of Fairy Tail, Erza meets her childhood friend Jellal. Jellal is now considered an enemy of Erza since he wants to fight her in battle but instead of something like that, their battle is going against each other in a board game. The conflict of this is other innocent members of the Fairy Tail guild can get dragged into this by getting severely injured or possibly facing death. Shall Erza game on or game over?

Volume 10 may not be so interesting but this one has gained its respect back. This story was very intense while I was skimming over the splash pages. In almost every splash page I turned to, there were intense battle scenes between Jellal and Erza and I wasn't able to tell who was going to win. When I got this typical manga off the bookshelf at one of the public libraries, I assumed this story was going to be nasty based on how the cover looked (which is why you never judge a book by its cover). It made me feel like I was going to get very bored off of reading the first few pages in which that has been something I had done before. This manga should be read by a thirteen-year-old since that's what almost every volume is labeled for when it refers to age range.