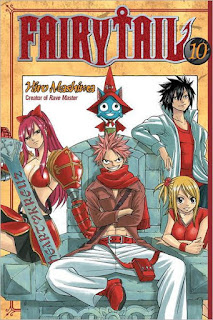 Asides from Loke, Erza Scarlet is one of the most powerful celestial wizards of the Fairy Tail guild. She has a past that she would never want to share because back then, she was a slave and the Tower of Heaven is a device that is forced to be built. Of course, Erza has been in other guilds before as well but she must lose her life for her old master which is a lot similar to some sort of sacrifice because of the period when she was a slave. The members of Fairy Tail must attend this mission to save her.

The cover is colorful just like in the previous volume but the story didn't seem to catch my attention this time. I think this is something a typical author would write about in his or her stories. I have seen the battles that Erza has faced during these few chapters but it still wasn't too appealing. The author should've added more battle scenes where Erza had to fight her master to keep her life. Or also, he could've made Erza's past a little more interesting and creative. I noticed how in every volume, there is a different character each time on the book spine. Since this is a volume containing a basic story, I would most likely recommend this to a twelve-year-old. If the book cover and the plot seem child-friendly, then I think this will be considered most compatible with this age range.