The Dark Prophecy by Rick Riordan 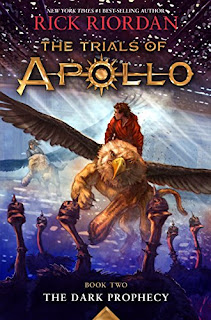 This is the second book in the arrangement Trials of Apollo. Apollo has reestablished the main prophet, however, there is a lot more to come. Apollo is currently at Camp Halfblood as a human named Lester. Apollo has confronted a few risky and embarrassing trials at Camp. His next target is to go right to the American Midwest into a cavern that conceivably holds answers for him. This isn't as simple as it appears. Apollo should now leave the security of Camp Halfblood and set out on a hair-raising excursion. An evil Roman emperor remains in his way. Apollo will require quality, fearlessness, and backing from certain partners in Camp Halfblood. Apollo has existed for around 4 thousand years and this will be his greatest test yet.

This novel is very similar to the previous one. Apollo sets out on an exciting journey and faces near-death situations. I would recommend this novel to anyone who is interested in fiction, adventure, and thrill. This book has a vocabulary that might be a little difficult to understand at first, but after you get the plot and purpose of it, it is pretty straightforward. I really liked how the author conveys the characters and helps the reader connect to them by using imagery and literary devices. Apollo is a dynamic character meaning he learns from his experiences and it is nice to see how he develops throughout the story. This book is made for teens and adults but children can also read it as long as they can understand the book. Apollo's journey really grasps the reader into the book which makes it so interesting.