Code of Honor by Alan Gratz 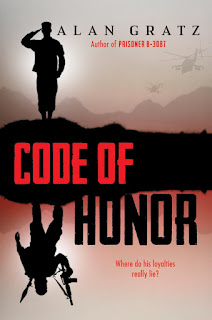 Kamran Smith, an Iranian-American, has everything. He is a star football player, dates a popular girl, and is excited to follow in his brother Darius's footsteps and attend West Point and join the Army. But then, everything changes. Darius is accused of being a terrorist, seemingly joining al Qaeda and attacking a U.S. Embassy. Videos of him get released in which he makes threats against the U.S. and speaking of a major, upcoming attack. Because of this, everyone turns against Kamran because they believe he is a terrorist too. Then, he and his family are taken into custody by the U.S. government. Kamran refuses to believe that Darius is a terrorist and that he would never betray his country. Now, Kamran must set out to prove Darius's innocence and to stop this terrorist threat, as well as uncover the terrorists' next plot. With the help of a ragtag team, Kamran will go on a crazy adventure to find his brother and discover the truth behind what happened.

I think this became my new favorite book. I love it. Alan Gratz did an amazing job with this masterpiece. The various incidents Kamran encountered while on the search for his brother were incredible. This book kept me in great suspense the whole time I was reading the book, and I wondered if Darius really had joined al Qaeda. The background stories of Kamran's team members were really interesting. This book also accurately depicted racism and stereotypes. The racial insults in the book are what many people call Muslims in real life. It also depicts what Muslims experienced in terms of racism and hate after 9/11, and explains the stereotype of all Muslims being terrorists. Overall, this book's outstanding use of real life historical events combined with fictional characters make for an awesome read.