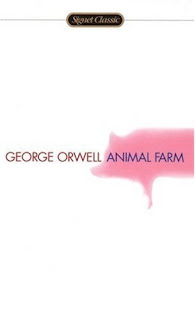 This classic revolves around a farm owned by an ordinary Mr. Jones located in a very small town near London. Many animals are under his care and there are many different types of animals such as Snowball the pig, Muriel the goat, Boxer the naive horse, Benjamin the donkey, Napoleon the leader of all animals, and many more! One day Mr. Jones heads out of town and all the animals find out he passed away from alcohol overdose. So now that leads to Napoleon trying to resolve all his ironic political and controversial problems. Especially since he has to find a solution on what he should do with all these animals living in the farm. Should he just keep the animals in the farm under his responsibility or let them go off to their own separate paths? "Animal Farm" is a novel involving a variety of emotion such as love, care, betrayal, and devastation that these animals experience.

I really liked the book. It was pretty simple and straightforward in my opinion. This gave a clear idea on what was really happening in the story. And it was pretty short too which is both good and bad. Good, because it doesn’t take that long to finish. Bad, because I wished for more detail. It would've been nicer if the author added a little bit more detail. I mean this book was pretty detailed but not enough. Also, this is one of the classics that anyone can take a look at as long as they have decent reading comprehension skills and vocabulary development too. Although, I kind of think that the book cover looked pretty basic. I visualized the book cover having some extra color rather than just a white background and a vibrant pink-colored pig on it. If this were to have a longer plot, maybe I would've liked it more, to be honest.